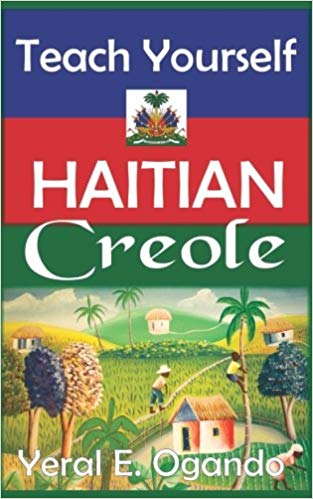 Learn Haitian Creole from Yeral he has his own unique style of teaching in his book” “Teach Yourself Haitian Creole”. Which you can purchase at http://www.amazon.com/Teach-ourself-Haitian-Creole-Ogando/dp/0996687300/ref=sr_1_1?ie=UTF8&qid=1443051258&sr=8-1&keywords=teach+yourself+haitian+creole.

His method is the only one of its kind you will find on the internet. It has served him well to learn 13 foreign languages. Yeral is a well-respected and internationally known Professor of biblical languages as well. He teaches with authority and passion for his subject matter. His passion and concern for his students is apparent in the writing of “Teach Yourself Haitian Creole” All you want to learn about Haitian Creole is in his book. You will not find a better purchase price of $9.99.

Then he builds step by step with each step building from the previous step. The reader learns step by step until he completely learns the language. Yeral says that if you will do what he is teaching you in his book. Follow his teaching method every easy step of the way.

You will learn Haitian Creole in 3 short months. The course may be purchased for a very reasonable price and the 3 month guarantee of learning Haitian Creole cannot be beaten anywhere on the internet. Yeral’s direct teaching style makes learning a new language a fun and exciting.

You can spend a lot of time studying for language tests. Make it simple and comfortable for yourself. Buy Yeral’s book and you can learn Haitian Creole in 3 months for $9.99. Yeral expects you to work but you will always pass his class because his method is simple but effective.

His book costs under $10.00. He is also offering a free Mp3 video bonus. He is selling his proven learning method for very cheap compared to competing books and classes offered on the internet. Imagine having a learned and experienced language expert right there with you teaching you a new language.

Buy Yeral’s book and you will have the same benefit. His teaching concepts are clear and easy to understand. You cannot beat learning Haitian Creole the Yeral way!

” Now to him who is able to do immeasurably more than all we ask or imagine, according to his power that is at work within us. Ephesians.” 3:20

Bible Verse of the Day for you!